By Dainy Bernstein in Student Profiles on August 2, 2018. 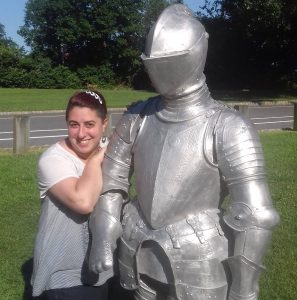 Dainy is a sixth-year PhD student in English. She studies medieval childhood and education. She earned her BA in English Literature with a minor in Classical Studies from the City College of New York. She is working on her dissertation titled “Medieval Adulting: Ideologies of Genre and Education in Late Medieval British Literature.”

Dainy is a WAC Fellow at Hostos Community College, and teaches courses at Lehman College and College of Staten Island. She served as the co-chair of the English Student Association in 2015-2016, and currently serves as co-chair of PKMS with Soojung Choe.

The kids are the future. And the past.

This entry is licensed under a Creative Commons Attribution-NonCommercial-ShareAlike 4.0 International license.

Need help with the Commons? Visit our
help page Send us a message

Built with WordPress Protected by Akismet Powered by CUNY